£ 129.99
Availability: Out of Stock
Comments:
It is important you observe the instructions and maintenance recommendations.

Metal chimeneas will rust. How much they rust is dependant on whether they are left outside in all weathers, how much they are used, how they are looked after. All can be re-painted. Rust does not affect use.

Metal chimeneas surfaces can become very hot in use and will burn the skin if touched. Burning temperatures inside steel and cast iron chimeneas are even higher than inside traditional cast iron chimeneas. We recommend the use of a chimenea guard when small children are present. 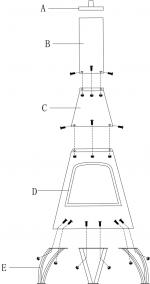 4. Put Rain Lid (A) on Top Funnel (B). Now check and tighten all fixings, assembly is complete